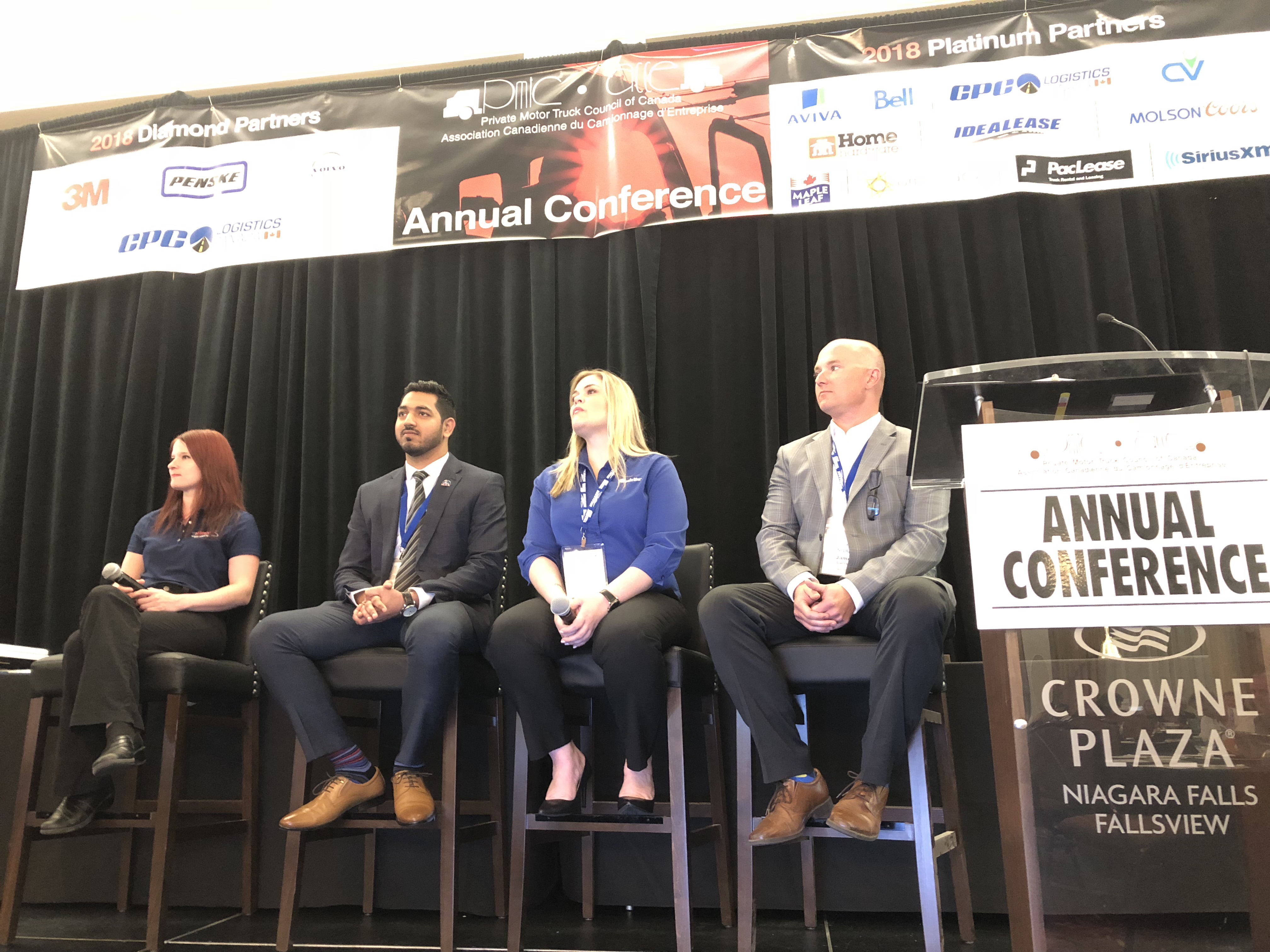 NIAGARA FALLS, Ont. – Kimberly Biback was new to the trucking industry when she attended her first annual meeting of the Private Motor Truck Council of Canada (PMTC). But a year later, the corporate relations and marketing specialist with Sharp Transportation is now actively involved as a council director and member of the Young Leaders Group.

Like three other members involved in a panel discussion at this year’s annual meeting, she has also been a student of the leaders who have helped guide her along the way.

Strong leaders are able to look beyond the specific roles that someone might hold, Biback suggested. Fifteen years, ago, for example, she was invited to be part of an employer’s environmental committee where she was asked to offer a few ideas. One of those became a formal program that was recognized with an international award and rolled out throughout the entire organization. Her career was enhanced, and the company benefited in the process.

“Leadership is important for the overall development and success of the company,” she added. “Leadership is all about growing your people, and the more people you can grow, the greater impact you can have.”

So, too, can it be important for leaders to understand different roles and their respective challenges.

“It means a lot to your front-line employees when you can get to their position,” Biback said, referring to the value of regular ride-a-longs with drivers.

“Those leading by example get their hands dirty,” said Meredith Vincent, regional sales manager for Truck-Lite. “You’re going to get a lot more out of people if you can show them you can do it as well.”

She also finds that one of the best ways to motivate herself is to make someone else’s day better.

Sud Malhotra, safety and compliance manager with Ameri Can System, stressed the value of regular communications. He began to regularly text simple safety tips to the drivers of his fleet’s 50 trucks, ensuring they had updated information. That led to direct improvements in productivity.

He says leaders should be positive as well.

James Currier, direct account manager with Train Trailer, agreed. He shared the story of one poor manager who created a negative atmosphere, leading the entire team down a “dark” path rather than motivating them. Rather than sharing positive words, he was always complaining that he wasn’t paid enough for the task. It was contagious.

In contrast, positive leaders help to inspire confidence through clarity, he said. “All the legs of the organization are facing the right direction.”

But is it important for a leader to be liked? “Good, bad or indifferent, people may have their own reasons why they like you,” Biback said. “A true leader is at minimal relatable.”

She also stressed the value of remembering how much little changes can influence broader corporate goals.

“The small things are your consistency, and that is your makeup and how you operate,” Biback said, referring to the values of focus and empathy. “But we often expect things from our boss, and we sometimes fail to see their challenges. It’s a two-way street.”

Each of the four stressed the value of ongoing education to further develop leadership skills, too.

“I’m a firm believer in lifelong education,” Currier said, referring to how he is developing skills to better communicate with individuals. He sees resources like the council’s Young Leaders Group as a great way to help.

The PMTC, meanwhile, has also partnered with Jeremy Enn of Eagle’s Flight to offer Driven to Lead — a four-part leadership program.

The program begins with a module on creating a culture of accountability, defining the qualities of a great leader and understanding the difference between leadership and management. Next is a focus on building and leading teams, helping to discover an individual’s independence. Communicating for impact includes essential communication skills. And coaching for results offers the steps to coach effectively.

The PMTC wants to develop more of them.