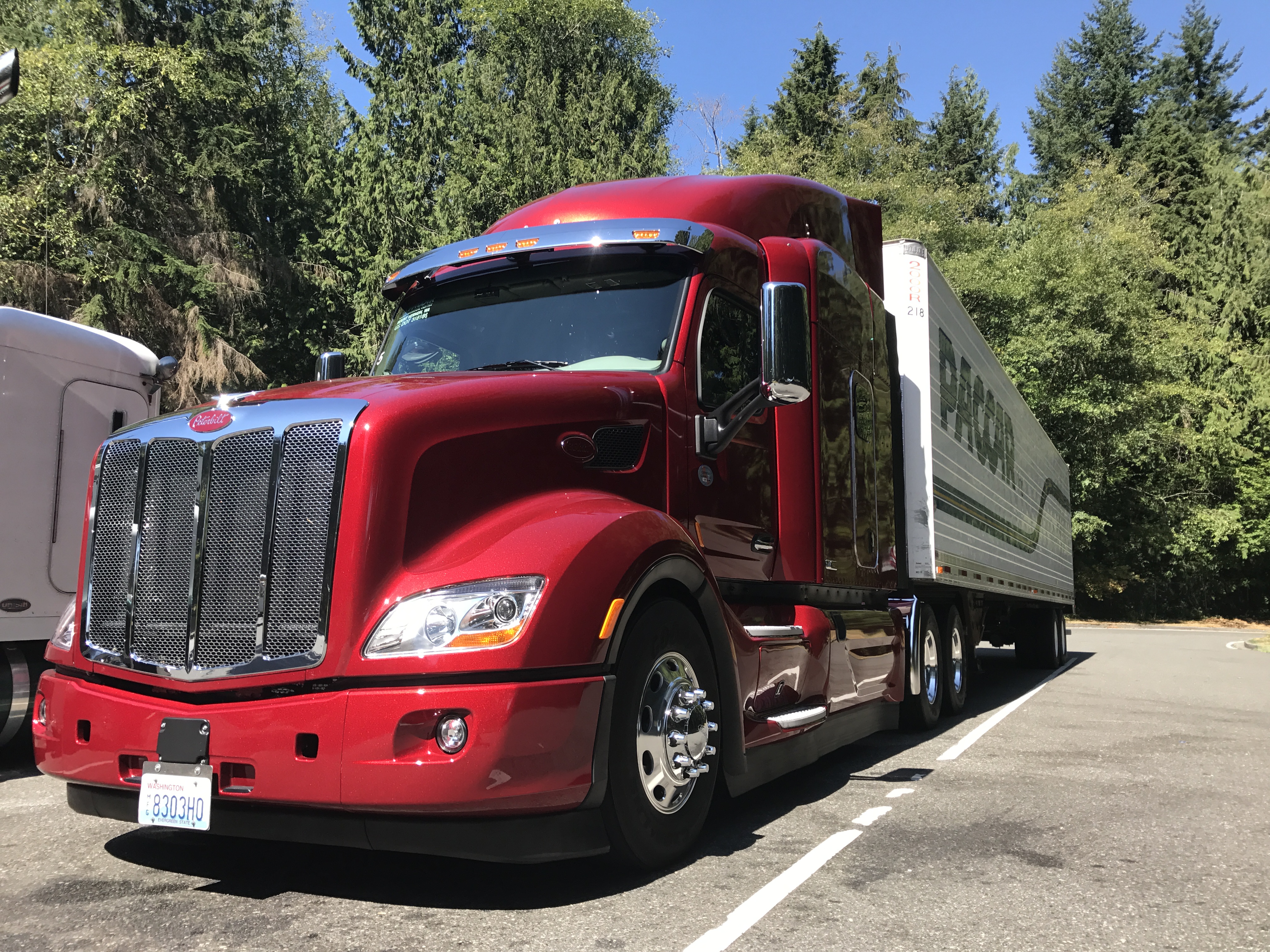 MT. VERNON, Wash. – There’s nothing quite like driving a truck with a completely dialed in powertrain, each component communicating fluently with the others as one cohesive system.

And that’s exactly what Paccar has gone to great lengths to achieve through the design of its own transmission, to complete the integration puzzle that until now lacked one of the most critical components. The manufacturer launched its own MX-series engine in 2010 and a 40,000-lb tandem drive axle last year. But the transmission is a vital piece of the powertrain, which until now, has been sourced from Eaton, and maybe not optimally designed from the ground up to work specifically with the Paccar MX engines and axle. That now has changed. Paccar Powertrain on Aug. 22 took the wraps off its new automated transmission, three years in the making and designed in close collaboration with Eaton engineers, some of whom were embedded at the Paccar Technical Center here, where much of the development took place.

This is not an automated manual transmission (AMT), Paccar officials emphasized. Unlike AMTs, which are typically built upon a manual gearbox foundation with electronics installed to automate the shifting, the Paccar transmission was built from a clean sheet design, to function as a purely automated transmission right from the start.

“This was never intended to be a manual transmission and that is significant and key in explaining many of its features,” explained Carl Hergart, director, advanced technology at the Paccar Technical Center.

One thing the clean sheet design allowed, was for the reduction of weight. Hergart said the Paccar transmission weighs 657 lbs, making it up to 105 lbs lighter than comparable automated transmissions and about 200 lbs lighter than the Eaton UltraShift Plus AMT. It’s a 12-speed design, with the widest gear ratio coverage in the linehaul market, Hergart added, for excellent performance at cruise speed and also low-speed maneuverability. We drove this Pete 579 with a fully integrated Paccar powertrain.

No oil cooler is required, and the oil drain interval has been stretched out to 750,000 miles. When a lubrication change is required, only 16 pints of fluid are required – nearly half that required by AMTs, Hergart said.

Working with Eaton, Paccar was able to adopt some of the best features from its existing products, such as a precision lubrication system that was first launched in the Fuller Advantage Series AMT, and neutral coast, which maximizes fuel economy on hilly terrain by coasting down certain downhill grades. The Paccar transmission also employs hill start aid, which prevents rollback (or forward) on hills when the brake pedal is released.

Other features carried over include urge to move, which allows the truck to crawl forward when the brake is release – just like a passenger car – and creep mode, which allows for smooth, controlled low-speed backing and crawling maneuvers. But other elements of the transmission are completely new, including the control stalk, which is mounted to the steering column and integrates with the engine brake controls. This is an intuitive, well designed control, and sturdy, too.

I got to drive two trucks equipped with the new Paccar transmission along the rolling hills between the Paccar Technical Center in Mt. Vernon, Wash., and Bellingham, about 28 miles to the north. I drove a Kenworth T680 with 76-inch sleeper and a Peterbilt 579 with 72-inch bunk. The powertrains were nearly identically spec’d: MX-13 engines rated at 455 hp and 1,650 lb.-ft. of torque, the new 12-speed Paccar automated transmission, and Paccar 40K rear tandem axles. The only difference was the rear axle ratio: 2.64 in the Kenworth for slightly lower cruising rpms, and 2.79 in the Pete. The shifter is sturdy and logically designed.

What I noticed on the drive was how well this transmission has been dialed in with the engine, and even active driver assistance systems such as Bendix Wingman Fusion and its adaptive cruise control. At 60 mph, I set the trucks in cruise and enjoyed the ride. The truck maintained a safe following distance, activating the engine and foundation brakes as required, all while keeping me within a couple mph of the set cruise speed. This was a nice way to drive, once I came to trust the system, which didn’t take long despite some steep grades.

I was particularly impressed with the Wingman Fusion’s ability to determine the speed at which vehicles that crossed into my space were traveling, avoiding unnecessary braking when those cars were quick to accelerate out of my space.

The transmission itself was easy to use. The control stalk is the feature drivers will interact with the most, and it’s very logically designed. A small lever on the end of the stalk can be set to the desired gear. The stalk also serves as the engine brake: pull it down to select your desired stage – first, second, third, or max engine braking. Work the stalk like a paddle shifter for manual gear changes.

This is a nice way to handle traffic jams. With urge to move, the truck will creep forward when the brakes are released and you can adjust your speed by manually working through the four lowest gears.

Predictive cruise is a nice feature that offers fuel savings by continuously referencing GPS maps of the upcoming terrain, and making minor adjustments to the truck’s speed to best take advantage of the vehicle’s momentum. This can reduce the number of gear changes made by as much as 20%. It will also allow the truck to coast down certain grades to reduce fuel consumption, but won’t allow it to exceed the set cruise speed by any egregious amount. A small yellow wedge appears on the cruise icon to indicate when this feature is at work. It’s very subtle, but can contribute up to a 1% fuel economy improvement.

I was pulling a 53-ft. van trailer behind both trucks, loaded to a gross weight of about 77,000 lbs. The transmission handled the job beautifully. Quick, precise shifting, skipping gears with ease. The transmission itself was a nice piece of equipment, but where it really shines, Paccar Powertrain officials said, is in how it’s integrated with the rest of the powertrain.

The MX-13 engine’s available power rating has been upped this year to 510 hp and 1,850 lb.-ft., a rating the Paccar transmission is approved to handle. Engine enhancements – including new variable speed coolant and oil pumps, and changes to the combustion and air handling processes – have yielded a 4% fuel economy improvement.

The new Paccar 40K rear tandem axle contributes another 1% improvement, thanks mostly to reduced parasitic losses resulting from a pinion throughshaft design that eliminated some gearing and reduced energy losses. Laser-welded components reduced the need for bolts, trimming weight, and also reducing oil churn-related losses. The new transmission is available for order in Kenworth and Peterbilt trucks beginning this October. We drove this Kenworth T680 with integrated Paccar powertrain.