AMSTERDAM – As one of the most important trading centers in Europe, Mercedes-Benz chose Amsterdam to show off its new Sprinter through initial test drive opportunities. 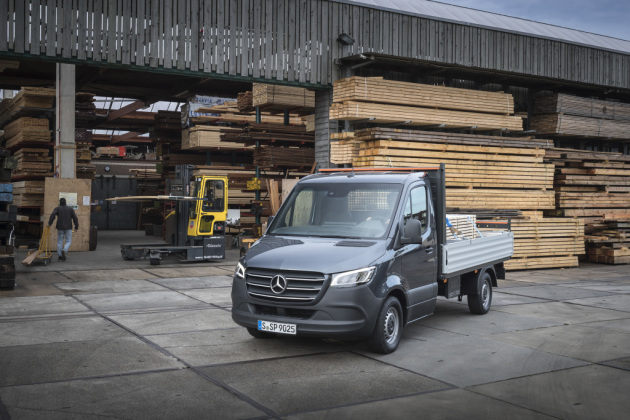 Traveling from Amsterdam to Leiden, Netherlands, and then further south to the port city of Rotterdam, journalists had an opportunity to experience the new Sprinter in urban, rural and industrial environments. Craftsmen, courier, and chauffer configurations were made available, sporting a full range of options.

I gravitated to the more commercial configurations, including a Sprinter 316 CDI cutaway with a flatbed body, and a 314 CDI cargo van. Both featured a four-cylinder in-line engine putting out 163 and 143 hp respectively and boasting a payload of 3,500 kgs. The flatbed was a rear-wheel drive with a seven-speed automatic transmission. The cargo van was a more European configuration, with six-speed manual and front wheel drive – a new offering from Mercedes, but not for the North American market where rear- and all-wheel-drive will continue to dominate.

The most obvious highlight of the new Sprinter for drivers, is the new Mercedes-Benz User Experience (MBUX) which first launched in the A-Class and has been carried over directly to the new Sprinter. MBUX allows you to communicate with your vehicles in new and various ways. You can input information using steering wheel controls, or by swiping the large, vibrant, 10.25-inch screen, or through voice-to-text.

For example, saying “Mercedes, I’m hungry” will turn up a list of nearby restaurants, including their ratings and locations. Mercedes will help guide you to any of them using its clear turn-by-turn navigation. You can also communicate with dispatch or management, call or text your personal contacts, or adjust your route according to real-time traffic conditions.

It’s a smart system that learns your personal preferences and can provide predictive and helpful suggestions for things like destinations, contacts or radio stations. The operator can also input their own personal points of interest.

The new Sprinter was designed to be a fully connected vehicle, and it achieves this through MBUX and also Mercedes Pro Connect – a fleet management telematics platform that allows constant communication between the vehicle and the office. From the office, fleet managers can monitor location, performance, and routing.

Connectivity equals productivity for fleets, and convenience for drivers. The new Sprinter is as connected as it gets.

It also features the advanced safety systems Mercedes-Benz is known for. Drifting across a lane marking without a signal light on results in a haptic reminder to pay attention, and if necessary, an application of the brakes. Backup cameras provide a 360-degree overhead view of the vehicle and its surroundings – a crucial spec’ when operating in urban environments, especially in Amsterdam where cyclists pop out of everywhere.

An afternoon sprinkling of rain activated the Wet Wiper system, immediately clearing the windshield of water without driver activation. Visibility over the short, sloped hood is excellent, while the mirrors and blind spot detection system enable safe lane changes on busy highways. You can’t help but feel confident behind the wheel of the new Sprinter, even in an unfamiliar city and country. 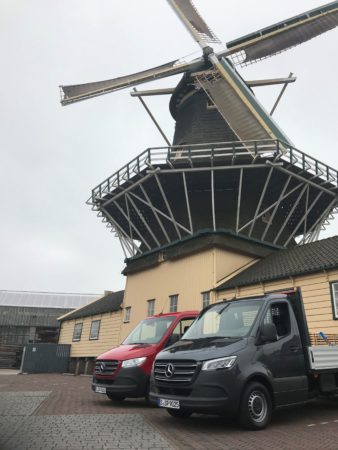 The new Sprinter is also highly customizable, with more than 1,700 different configurations available. You will find this vehicle capable of any job from delivering lumber to worksites, making grocery deliveries in tight urban areas, or servicing utility towers off-highway. It’s a truly versatile van.

One of the most common applications it’ll be put into is package delivery. In Germany, Mercedes officials noted, more than three billion packages were delivered in 2016, a number that’s expected to climb to four billion by 2021.

An electric eSprinter is in development for some markets, but its range is not yet adequate for the North American market. Work continues on bringing an electric-driven Sprinter to the North American market, but when we can expect that remains a mystery for now. Officials said the new Sprinter also improves on fuel economy, by as much as 5% depending on configuration.

Some of that is attributed to the manual transmission, which won’t be offered here, but officials said some improvements in fuel economy will indeed be carried over to the North American version, which will be launched later this year.

Drivers stepping up from a previous generation Sprinter will be impressed by the new Sprinter’s connectivity and advanced safety systems. Those who have never driven a Sprinter will be overwhelmed by the full Mercedes-Benz luxury experience, and pleasantly surprised that a work truck or cargo van can be this comfortable and satisfying to operate. Fleet managers will love their ability to manage the fleet, optimize and measure performance, and control their operating costs while improving efficiency.